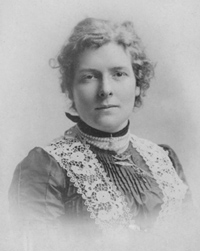 A recent publication which discusses in depth the origins of the Wall family in Ireland, inspired me to research my own ancestors. This revealed that my great grandmother was actually a lacemaker. Her name was Julia Roache and she married James Wall. She was a lace maker and is wearing one of the waistcoats she made in the photograph below. Lace making in Ireland began as a result of Ursuline nuns forming crochet schools to teach women and girls in need to work during the potato famine in the mid 19th century.

The crochet designs became known as Irish Lace. Some of the lace designs were kept secretly within families and only passed from mother to daughter. Sadly, this craft declined as a result of mass production. There is a wonderful museum in Ireland called The Sheelin in County Fermanagh which exhibits all the various pieces and works that exist in the history of Irish lace.

Further research also reveals that many Walls in England fled throughout the 18th and 19th century due to the lack of work in the textile trade. This may encourage you to research your own family tree and maybe discover if there are any traces of textile history within your own family.

The Man in the Painting
The Wall Family in Ireland